What are the movies that created fashion and trends for for men’s style?

I was wondering the other day, what influenced people’s choice of clothing. The society in which we live the particular context we can influence also influences us in the same way. The people we frequent, the premises, the environments influence the way we behave and dress.

The movies, part of the mass media all play an incredible role in influencing people’s ideas its not by chance they were used in totalitarian governments to distort people’s opinion.

Why do you need to read this article?

Do you know these movies? Have you ever noticed that these films influenced your way of dressing or behaving? Or did you notice any changes after these epic films? I personally like to discover the real reason behind the behavior. Identifying the films that have influenced society’s costume is fun …

What is the inspiration for this article?

Some of the films that I mention in this list, I have watched and looked at them many times. For example Top Gun. I like airplanes very much, as a boy I wanted to join the air force. So everyday, over a period of time I literally continued to watch the film.

I also love cinema and so it seems to me a good combination to combine style and Cinema.

What criteria did I use to choose the films?

I have chosen in particular the films released over a period of 40 years. Previous films are valid, but less contemporary. I tried to focus on male rather than female protagonists. I avoided films on fashion. I have searched exclusively for films that have also created an impact on the level of costume and masculine style.

Why should you read this article?

If you’re under forty and you’re part of the Western civilization you’ll definitely know some of the films I’m talking about. If you have not seen these films I have left a link for each of them.
Let me know your opinion.

Film of 1977 and directed by John Badham. This film was a worldwide success, needless to say that John Travolta had become the symbol of this style. Flared pants, glitter, shirts with beaks … Today no longer in use but has inspired a lifestyle for many men.

Film of 1978 and directed by Randal Kleise. Grease is another great film that has established many ways of dressing. I do not add anything else.

1986 film and directed by Tony Scott. The leather aviator jacket, the jeans and the Ray Ban glasses. This Macho man style became very famous in the eighties.

Read also  Martial Attitude: The echo of the East in London

Film of 1990 and directed by Garry Marshall. The fashion of Richard Ghere and his gentleman’s fashion have also entered the collective imagination, determining the standard of what a successful man is.

Film of 1992 and directed by Quentin Tarantino. This film has achieved so much success that in Italy they have also copied the style to make a television transmission.
Elegant characters but not too many who are actually robbers and murderers.

1994 film and directed by Alex Proyas. Film sadly famous for the death of the protagonist on set has achieved a huge fame, creating the dark character from the long coat …

Film Film of 1994 and directed by Quentin Tarantino. Quentin Tarantino’s masterpiece, tells the story of characters on the edge of American society. Also, in this case it is contained the style present in the reservoirs dogs of the “assassins with style”.

Film of 1996 and directed by Danny Boyle The message of this film is powerful: “let’s get rid of everything that is bourgeois, and let’s live life to the maximum”.  Loose ties, trash clothes and out-of-fashion clothes help to amplify the message that the director wants to deliver.

Film of 1999 and directed by David Fincher. Very powerful film, whose message is also an accusation against capitalist society, whose criminals are the real stars. An incredible Brad Pitt dressed in a glamorous and spectacular way.

Film of 1999 and directed by The Wachowski Brothers. Matrix is ​​famous for many things. But also for the futuristic and post apocalyptic style that emanates in every frame. Unforgettable the coat of Neo or Morphheous.

Film of 2012 and directed by Sam Mendes. Daniel Craig is amazingly elegant and leaves little room for the previous 007. I do not add anything else it is impeccable in every scene, even in the action scenes. Its perfect.

Film of 2015 and directed by Sam Taylor-Johnson. Special mention for this trilogy that has caused a lot of clamor in the female world a few years ago.
Jamie Dornan is really the aesthetically perfect man. Elegant, muscular and sexy. However, he has some minor problems in relationships with women.
His clothes and the millionaire context have nevertheless contributed to making it iconic.

Style and clothes are part of the message that the person communicates to others. They can remain indelible in people’s minds like these movies.

Let me know below what your comments are I am eager to discuss this topic. The skin tone: Understanding tone and sub tone of the skin 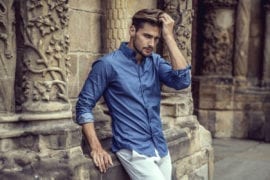